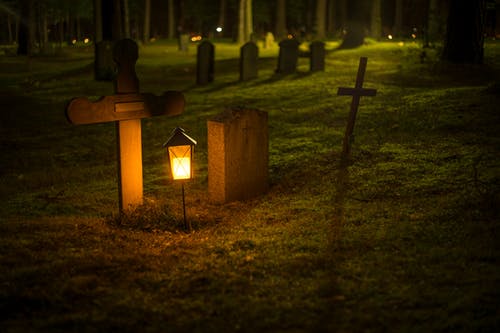 While out driving, going about normal my daily activities, I noticed a line of cars parked in St. Mary’s Cemetery. The sun, which has been covered with clouds for days, was out and it glinted off the cars as I passed by. It wasn’t until the flashing of the sunlight stopped that I noticed a group of people at a graveside. They stood in somber colored clothing, huddled together, under the bare branches of huge trees. The dark gray tips of the branches looked as if they were reaching toward Heaven.

How appropriate, I said to myself.

A thought entered my mind: I wonder if any of them are looking at me driving by? Is one of them wishing that their life was as it had been just days before this one? Did one of them want to trade places with me . . . seemingly going about my business . . . instead of standing at the edge of a newly dug grave into which their loved one had been lowered into already? Or, more probable, were they so consumed in the fog that grief brings that they don’t even notice what’s happening around them.

When I found out with certainty that my daughter WAS the young woman who had been zipped into the black body bag (a weird thought just slipped in between my words: are the bags reused?) it had still been dark out. It was “still the night she had been alive in”. When the sun came up that morning, as I was going to tell her twin brothers that their sissy had been killed, I realized I was in the first day that didn’t include her alive. The sun, bright on that January morning, pissed me off. How could it come up like everything was the same as it had been yesterday??

Briefly and painfully, the fog of grief that had settled upon me parted and I saw beyond my existence. Others were driving by in their own cars. Heading to who knew where but probably somewhere they went every day. “I want that again!” I screamed. “I want yesterday!! I want Becca!!”

Rage slid into the space where the fog had parted.

How, I thought to myself, did the sun still fucking rise? The world should have stopped spinning. Everything had changed. Why didn’t others see it? My daughter is dead – how are you going to work? My child was killed – you can’t laugh. My daughter is gone – why is your child in the car with you?? My entire life had shifted sideways. Some things were the same . . . but forever different. I didn’t know it then, that first morning, but I would spend years trying to find a place where I fit in again. Truth be told, there was a long time I didn’t want to fit in at all so wanting to find a place didn’t come until much later.

Seeing the funeral today brought me right back to the feeling of isolation and utter aloneness I felt after Becca’s death. This time of year, so close to the date of her death, these emotions are closer to the surface anyway. It doesn’t take much to have the thin skin covering them ripped open and allow them to bleed out.

Just as quickly, I thought, the group of people in the cemetery are starting their own grief journey. Who, in their life, had died? Was it the expected death of a beloved elderly person who lived a long life full of love? An unexpected death of a young person who still had years ahead of them? Was it cancer that stole a future? Or, violence? Was the coffin small enough to hold the little body of a child? Maybe the final resting place for grandma, lined with her favorite color, in which she could spend eternity? I won’t know the answer. What I do know is this: another grief journey has started and they have a long road ahead of them.

I bristle when someone compares the death of their loved one (spouse, parent, sibling, pet) to the death of my child. Though the death of a parent, for example, brings so much with it . . . it is not the same as losing a child. And, it never will be. No other death compares.

Yet, I know that any death brings with it intense sorrow and only feeling the grief will begin the healing. Healing from a death is difficult. Healing from the death of child is near impossible. But, we can all be there for each other when we allow ourselves to be vulnerable to another’s pain.

As I drove home tonight, past the same cemetery, the sun had sunk below the horizon. The cars were gone and there was no one around that I could see. What a different scene from the one I saw earlier.

The trees, however, still reached for Heaven.