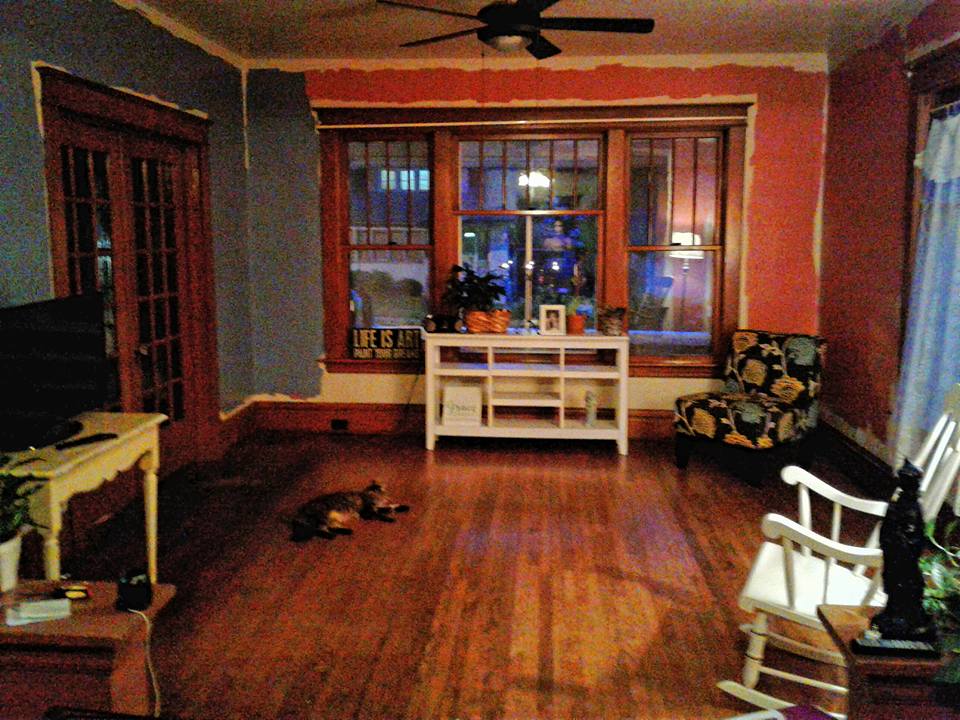 Healing comes in many forms after the loss of a child. Some we are aware of as they are occur with the realization that something is shifting within ourselves. Others we put into motion with chosen actions knowing we need them to make progress. Then there are the ones that begin with a whisper in the farthest corner of our souls. Often times, I think, these are the ones that provide us the potential for the most growth.

The house we recently moved into was built in 1908 and is called an American Craftsman. This style was opposite the houses that were popular during the Victorian Era, which were over decorated and opulent. It was also a reaction against the Industrial Revolution highlighting handwork over mass production. The Craftsman showcases clean lines and natural materials and the visibility of handicraft. These were largely middle class homes.

Our home has most of the common architectural features of a classic Craftsman. A larger kitchen that is more accessible, and has straight sight line,s so the homemaker could be more aware of what was happening in the rest of the house. As middle class there would probably be no live-in servants and the woman would be responsible for the entire home. If the family did have live-in help, the rooms afforded to staff would be of slightly lesser quality but still well appointed. The kitchen in our home has high ceilings and beautiful windows. The original shelving is made from a beautiful wood that shines like honey in the early evening sun. I just adore this room and I look forward to preparing big holiday meals within its walls.

We have a large front porch, tucked under the low pitched roof, with the square tapered columns at each corner as would have been fashionable in the early 20th century. The windows of the home are described as four-over-one, meaning the bottom section is a single pane of glass and the top is divided into four equal, vertical, rectangular ones. Many of them have the original storm windows, too. Not very many people still have to take down the storm windows after winter passes, to replace them with the screens, anymore. Today’s windows are built to be used year round. I like that we have to do this!

There is more original, than replaced, in this 108 year old home. What has been changed was done so for convenience. Carpets glued onto the deep red oak floors that have felt the heels of the women who were rebelling and wearing the “radical” new fashions of the Jazz Age.The bathroom walls are covered with pieces of formica to hide the plaster that has started to crumble from the slat and plaster walls. The original pedestal sink was removed and prefab counter/sink combo was installed in its place. And, sadly, there is no longer a clawfoot to soak in.

Here and there, throughout the house, there are a few other changes that have dimmed the character of this beautiful home. But when you look at it . . . it’s not hard to envision what it must have been like over a century ago! Did a young boy living here join a new group called the Boy Scouts? Were immigrants, whose numbers had hit an all time high that year, moved into their first American home? In researching the early 1900’s, I have learned what the inhabitants would have experienced in this house. Manchu Picchu was discovered in 1911. This was also the year the Manhattan Sweatshop Fire killed 146 garment workers, most of them women, who either jumped to their death or died from the smoke.

In 1912, the unthinkable happened. The unsinkable Titanic, sunk. Did the family who dwelled here follow the story on their radio? All of them huddled, listening with horror, as the news unfolded? Similarly, did the news of World War I echo through these rooms . . . then become personal as the oldest son talked of joining the military? Were the daughters, who lived here, suffragettes? When America entered the war, in 1917, did the mother who lived here start to say extra prayers for the safe return of her son? I hope, standing in our foyer, she didn’t watch a chaplain ascend the steps, and deliver the awful news of her son’s death.

1918 brought the influenza epidemic. Did the mother, who’d just lost her son a few years prior, attempt in vain to keep her surviving children healthy? Was there a paper nailed to one of the square pillars stating the house was under quarantine? This house saw prohibition. The creation of the Grand Canyon National Park. The brutal assassinations of Czar Nicholas II and his entire family. Over one hundred years of life and death have happened within these walls. All of which should be honored.This home should be brought back to its original beauty.

That is precisely what we are working hard to accomplish. We both feel it’s important. But, why?

A few reasons I believe.

First, having a task to occupy our hands also occupies our minds. Immersing ourselves into a project keeps us busy. Down time can give us too much time to think about everything. This isn’t always a good thing. When we physically work we expend energy and being active is integral to our healing. We must move.

Second, restoring the house, as close to its original state as possible, helps us to honor what’s happened in the past. The tangible parts of the house will appear as they had decades ago. For instance, the creaky wooden front staircase. I can almost see the beau gazing upward as his prom date slowly descends. Her gloved hand sliding delicately down the banister rail. Or, comically, a young lady being betrayed by the wood’s sigh when she sneaks in after spending the night at a speakeasy. All of those people mattered. They all existed. To wipe away the original parts of the house is another removal of their having been here. To do that would make me sad.

So much of what “was” has changed since Becca was killed. Stores, she shopped in, are no longer there. Roads she drove are lined with new buildings and houses. Cell phones are completely different. Our country, itself, has shifted immensely. How much would she recognize if she could return? To watch so much altered brings hurt to my heart. It’s as if she is being slowly erased and drawn over.

Third, we can not bring our children back and make things like they were. Neither of our daughters will walk through the door and hugging us. There is no catching them up to what’s happened since they were taken by death. No way possible for us to fix that aspect of our lives. But, in this house, we can.

We can tear down the cheap wall covering and repair the plaster. Pull out the ugly sink and replace it with a pedestal one which clean lines and curves. With much work . . . the carpet and adhesive will be scraped up to reveal the original wood beneath it. The porch will be stripped of its ugly color. The bedrooms painted. The house’s past is something we can bring forward into today. It’s a physical manifestation of what we so deeply want to do for our children.

I feel comfortable in this old house. There is a peace in thinking about the dozens of people who dwelled here over the years. There is a spirit to this home. And, it’s an honor to be living here and helping Stacey do the work.

I know the past is the past. But bringing this past, into the future, is helping my soul.

I'm a mother, artist, and writer. A decade ago I lost my daughter. I find writing, and painting, heal me. Sharing my story of loss and healing lightens what I carry. And, hopefully, my words help another along the way. View all posts by Diane Neas